This has been a big week for me.

Back in something like 2003, I was laying on my back, looking up at an angled skylight and seeing only lightly clouded sky. I found myself wondering: what if that was down? What would it be like to live in a world where the sky was like an endless ocean, above and around you? Where you travelled in airships between floating cities, like islands in the vast blue void?

END_OF_DOCUMENT_TOKEN_TO_BE_REPLACED

So I’ve been pretty inactive on all fronts lately; namely my website, writing and unity projects. This has been in no small part due to a big push to complete my Private Pilot Licence over the past few weeks. It hasn’t been easy, but today marked completion of the last element of the course and I now have only to send off the application form itself (and get it approved by the CAA).

I first mentioned the ominous booking of a trial flying lesson back in January of 2009 and since then have made many ramblings on aviation, but it really does feel like the culmination of something epic today!

As an unrelated side-note, I’ve finally found a source of buying MP3s that I get on with, namely Amazon’s MP3 store. It’s been a while since I’ve got into any new music, which has led to a bit of a music-buying binge (particularly the retro-80s “Outrun” subgenre assembled by Rosso Corsa Records). The option to have any of it (and all of it) completely separated as downloaded MP3s may have helped, too. Cloud is okay as an option, but never been big into music “organisers”. Then again, that’s probably just iTune’s fault.

A lot of the world’s problems are probably iTune’s fault.

Flying on instruments has nothing to do with the makeshift use of musical equipment as aerial transportation. That is something else entirely.

IFR, or Instrument Flight Rules, bascially means that instead of flying the plane by eye, we fly by the readings from our instrument panel. The first thing that strikes most people when I tell them this is that I’m not doing it already. No, the plane does not have GPS. No, it doesn’t have Radar. Yes, I look out the window to see where I am. So the concept of IFR is not incomprehensible in the world of the modern airliner. The main advantage of IFR over Visual Flight Rules, or VFR, is that we can fly in much more limited visibility. END_OF_DOCUMENT_TOKEN_TO_BE_REPLACED

The altimeter is essentially a barometer, a device that measures the difference between two pressure levels.

It’s better known as “that thing in a plane that tells you how high up you are”. Exactly what that means varies, but in aviation there are basically two ways of expressing it:

Altitude, or QNH, is your height in feet above mean sea level. Sea level is very often lower than the ground below you, but QNH is useful because it gives a common level to work with between airfields, and constantly updating your setting isn’t really feasible.

Height, or QFE, is your height above the ground level at a certain location, generally an airfield. Hence a good way to remember the two: QNH is Nautical, QFE is airField. The uses of calibrating your altimeter to the ground level are obvious (especially when landing), but of course the ground doesn’t stay at that level and away from the airfield the reading isn’t always useful. END_OF_DOCUMENT_TOKEN_TO_BE_REPLACED

One of the great things about Unity is its versatility, most notably that it runs in a browser. The Webplayer version builds from the exact same project as the Windows or OSX download does, and the plugin to run it is one of the easiest, most automatic things I’ve ever downloaded. Now, Iron Skies may end up a little too much for browser play, but this also has the interesting advantage of providing actual playable demonstrations to the devblog! 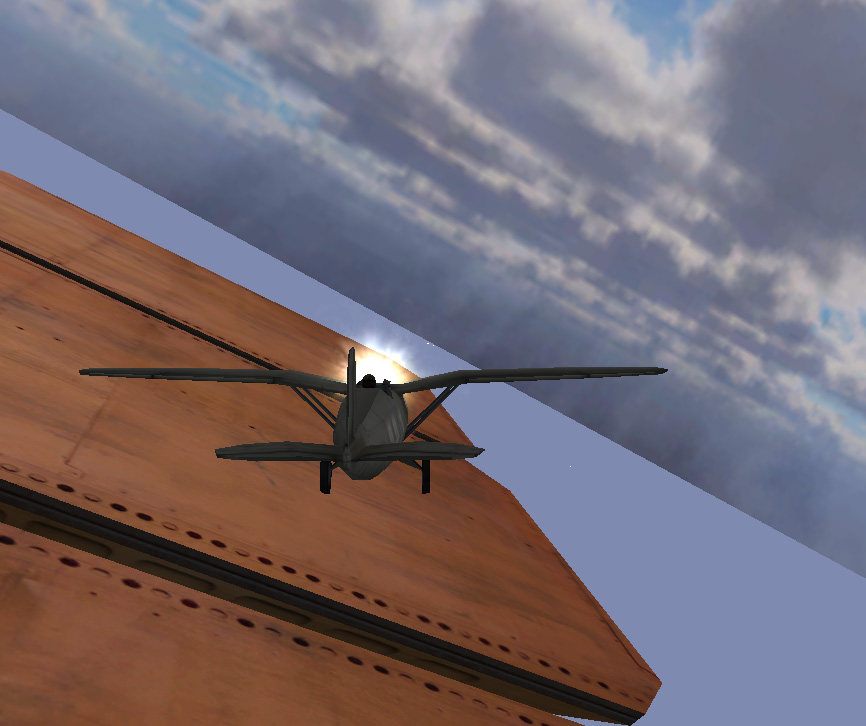 This demo has no gameplay yet I’m afraid, it merely demonstrates skyfighters: the little aerofoil craft that can swing the tide of battle. While this isn’t a flight sim and is mainly about airships, I have been tweaking the skyfighter controls relentlessly and have just overhauled them again. The basic movement and control mechanics are important to nail down for all player-controlled craft, and that I’m not too far off now. Once it feels good, I can start getting into the gritty detail of combat and gameplay.

I will admit quite readily that, while I do love my flying, I actually had butterflies about flying last Sunday. But this is because I was to drive to Clacton, then fly to Duxford and back, spending the day in between at the museum. Seeing as I was due to start simple circuits, this was quite a jump; straight into navigation 101 before I’d even gotten practice at takeoffs. I was a little unsure at first in case I did something wrong or goofy. In the end I realised that was stupid and I should totally go for it anyway, so I did! It was really interesting getting first hand experience of stuff that was still really hazy even after many hours in the air; like radio procedure when passing though areas and how to figure out where you are. END_OF_DOCUMENT_TOKEN_TO_BE_REPLACED

A lot of people I’ve talked to have been curious what this flying malarky is all about, so I thought I’d explain a bit about it. I had a trial flying lesson in April, actually an Xmas present, and to say I loved it would be an understatement.

After a few month’s of Hmms and Ahhs, I decided to go for it. However, flying is rather expensive. This is probably something most people take for granted, but I feel the need to reiterate. It’s expensive. The impression I’ve gotten is that everything in aviation costs at least £100. Lesson? Bout a hundred. Flight medical? Hundred-ish. Pre-flight biscuit? Hundred pounds. I don’t think you quite understand. It is an Aviation Biscuit, essentially a normal biscuit but it costs £100.

Well, okay so added danger leads to increased cost of pretty much anything. Cost, like all things, is entirely relative. So with the callous capitalist concerns cast aside, what’s involved in learning to fly?

First of all, I am applying for what is called a PPL; the Private Pilots Licence. This is the international standard, also known as JAR, as opposed to the national ‘NPPL’ which only certifies flying in the UK. The JAR PPL requires a minimum (usually more) of 45 hours worth of flight training. Thus far, in the past 3 months, I have had six. At the current rate it will take me about 2 years to pass training, but it’s just as well considering there are 7 ground exams to complete from Air Law to Meteorology.

So why am I doing it? That’s an interesting question. Most people seem to expect me to have a grand plan in the works to be flying an A380 by my forties, but to be honest I just really love to fly. I’ve always felt a certain affinity for the air and aircraft, so I’m just going to see where it takes me. Regardless of how far I take it, I’m learning things along the way that I’ve always wanted to know more about.

I just watched Yes Man. And then everyone went to the pub, but I came home cause I was all like “nah I got stuff to be getting on with…”. Obviously I learned nothing.

I have felt the need recently to vent into writing but every time I go to make an entry I forget what it was I wanted to say. Chances are that means that nothing’s really bothering me, which is a good thing, right? Or perhaps I’m just in bit of a writing drought; I haven’t worked on any of my books in months at least.

Finishing the monument that was Tales of Wobells over the course of December was probably why for the most part. And maybe a little time for relaxing with Lucy. But as 2009 kicks off, I find myself wishing I were doing more. I want to get out there and ‘soar’. I just have this continuing sensation of trundling down the runway, but those wings aren’t kicking in with the lift just yet.

Speaking of which, got a flying lesson to book sometime. Can’t wait.