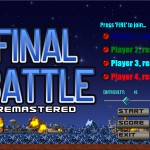 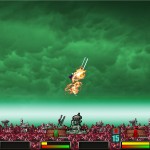 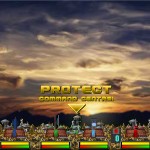 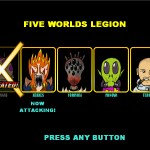 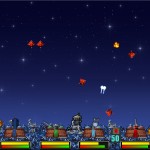 Like George Lucas, I have an unhealthy obsession in nostalgic reworking. The Final Battle was one of the few concepts from my Games Factory years that has stuck, with attempts at newer versions more than a few times.

The premise is simple: your homeworld is under attack from a bunch of unscrupulous cretins calling themselves the Five Worlds Legion. You must fight them off with your trusty defense turret, with help from up to three other buddies. Each battle has a legendary 80s theme song in glorious midi (no prizes to guess the main theme), and the aim of the battle is to survive the oncoming horde until the music track ends.

Just the kind of surreal binary-dope they were smoking back in the proto-gaming era.

DISCLAIMER: This game is provided as-is with no support and is total Freeware you download entirely at your own risk. But feel free to email any questions to novodantis@gmail.com.

INSTALLATION INSTRUCTIONS: Simply unzip to where you want the game to reside (such as “C:\Games\”) then run Final.exe! For convenience, right-click-drag Final.exe to your desktop, and select Create Shortcut.