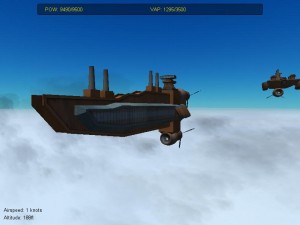 You can now get an impression of the way ships will work in the game. Your ship has two key resources: Power [POW] and Vapour [VAP]. The details here are still not set, but basically each component on the ship may consume or produce either of these two (along with other values like engine thrust). The rate of use/make is defined by the part itself, but also multiplied by its Output Level. This is basically where you control how much Oomph a component is giving you. You can lower it to reduce its drain (eg. shut down or reduce an engine) or pump it up to meet demand (stick the Power Plant up to 120%!). But over 100% the production/consumption ratio worsens, so it’s a matter of using When The Time Is Right!

To change a component’s output level, simply left click on it to open the mini menu and slide as desired (note that you currently need to close a minimenu to be able to open another). I’ll work towards adding more controls to this in future demos, but for now try experimenting with the values of Output! See how fast you can get the old beast.

If you’re wondering what produces the lift at present, it’s the hull. That might change, though.

You may also notice the Understorm at altitude zero, the lowest level of cloud in the world of Azimuth, along with its somewhat guff temporary effects. Needless to say, venturing below this level can have shattering consequences.

Hope to have another update soon! Coming next will be sorting out all the issues I have with the Turrets, so we can have ships shooting each other again.